Covid-19 restrictions across large parts of China continue to cause delays to both Sea and Air Freight services, with growing uncertainty about the longer term impact on supply chains.

China continues to practice its zero-tolerance policy to prevent the largest Covid-19 outbreak to date from spreading within its population. The ongoing lockdown in Shanghai and restrictions more recently imposed in Guangzhou (both home to some of the world’s largest ports) are having serious consequences to supply chains. Although ports have been able to largely remain open, production has been impacted by many workers at ports having been quarantined. The trucking industry has been particularly affected and is struggling to unload cargo due to strict health permit regulations, causing shipping containers to back up, creating congestion at terminals.

There have been signs of improvement in the last week. The Shanghai government announced that the first group of companies could resume work which has resulted in some factory production restarting. Some warehouses have reopened, allowing the collection of cargo albeit with a limited service. High-speed roads are also slowly opening, with more health passes issued to truck drivers to help with the inland transportation of goods.

Despite carriers omitting calls to Shanghai port due to the decline in export container volumes, there are still a number of vessels waiting to berth. With too little cargo arriving at ports in affected regions, shipping lines will continue to announce blank sailings from China in the coming weeks.

The situation and level of Covid-19 disruption varies from region to region, below is a summary of the key areas that are currently being impacted. 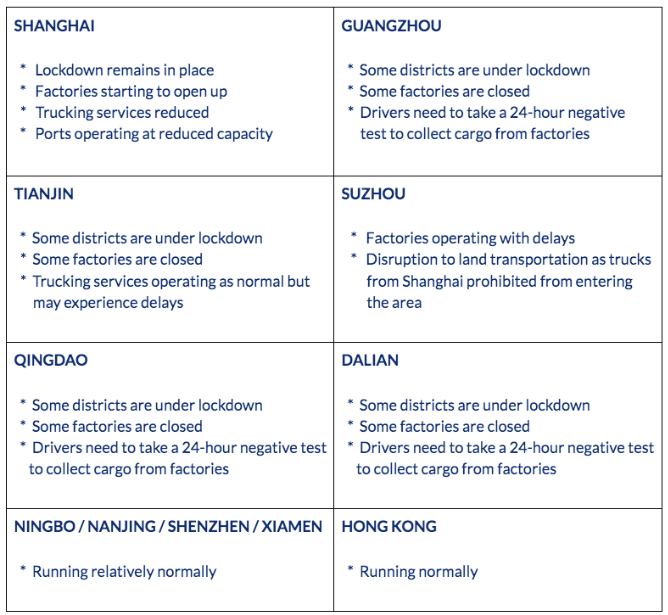 With such a huge amount of uncertainty in the market, retail analysts in Western economies are struggling to understand what the outlook is. There is speculation that once the lockdowns in China end there could be a sudden surge in export cargo. No one knows when this will happen or how long it will take to clear the backlog of goods from Chinese factories. What is likely is temporary congestion at ports in China. How significant the longer term impact will be is yet to be seen, however analysts are stating that it is likely that, as a result of pent up demand, freight rates may remain elevated for some time yet.

Air freight services from Shanghai continue to be significantly impacted with most flights still suspended. Air terminals are not receiving cargo from factories due to the disruption of trucking services in the region. As a result cargo is being redirected to other cities, creating congestion at other major airports including Zhengzhou, Beijing, Guangzhou and Shenzhen. Where possible we are moving our customers’ cargo via Southern China from smaller airports when the freight bookings become available. It is anticipated that the lack of people to load shipments combined with the lack of airport trucking will create a backlog that will take some time to clear after the lockdown is lifted.

PFE helps with the launch of the 2017 Magnum Pleasure Store

June 11, 2021 - by Hannah Marshallsay
We use cookies on our website to give you the most relevant experience by remembering your preferences and repeat visits. By clicking “Accept All”, you consent to the use of ALL the cookies. However, you may visit "Cookie Settings" to provide a controlled consent.
Cookie SettingsAccept All
Manage consent